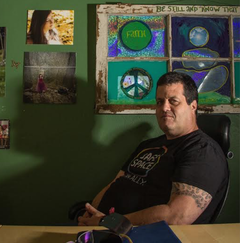 Rabbi David Burstein has worked for the past 25 years as an experiential educator and was ordained as a rabbi from HUC-JIR Cincinnati in 2001. He has served congregations in Richmond, Indiana and Dayton, Ohio and served on the staff of Earlham College. He was the director of Kulanu -The Cincinnati Reform Jewish High School from 2003-2018 and is a national expert in teen education. He is known for his work in the field of spirituality and meditation and is an educational consultant for innovative and creative programs.

He has taught mindfulness meditation for over 20 years and led over 50 retreats for all ages. Rabbi David is a recent graduate of the M2 Experiential Educator Cohort and was a co-creator of the Cincinnati Teen Collective Grant. He has been trained at Harvard College in their program on mediation and negotiation. He has also traveled with peace negotiation missions to Israel, Syria, Jordan, Egypt and Northern Ireland.

Rabbi David has played the hand-drum and studied meditation for more than 25 years, holds two black belts in martial arts and is working on his third in Krav Maga serving as an instructor. He has also coached youth, high school, prep school, and college club lacrosse.

His greatest joy comes from being a dad to Emma, Coby and Nadia, and husband to Elizabeth.